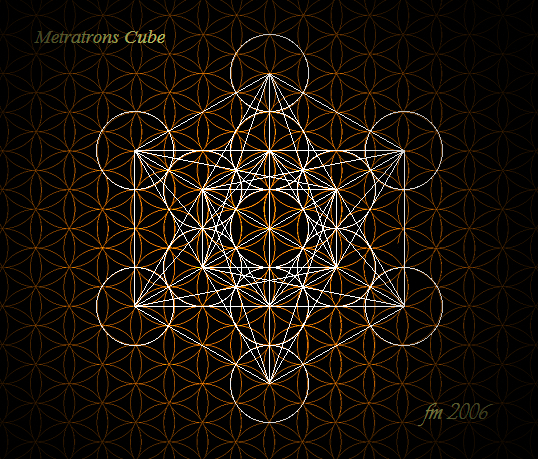 A recording has been made of what is believed to be the faint echo of the sound wave of the Big Bang reverberating throughout the galaxies. It sounds rather like a 747 flying only ten feet over your head. It was the loudest sound there ever was. This sound,  or note, is likely to be what Western metaphysicians refer to as the Logos, or Word.

“In the beginning was Brahman with whom was the Word” Vedas.

(To hear the recording go to http://www.spacesounds.com).

Chaos is definable as an absence  of geometry. In a universe without geometry, experience and growth would be impossible, it would be oblivion. Creation used geometry to express Itself in our universe. Geometry created the potential for crystal mineral structures within the one undifferentiated reality. Structures like you and I, perfect expressions of  Creation.

The seeds of atoms and minerals, the Platonic Solids were born in the *Cymatic sound of creation, “Om”.  They were arranged according to the above pattern, it being the blueprint for everything. The straight lines in the pattern are male, the circles female. Metatron’s Cube is the primary route that spirit takes to enter the physical universe. It is the matrix whose sudden appearance and evolution within chaos creates order. It begins with one self-aware particle, coming out in awareness from its centre and spontaneously following this pattern to create a universe within the universe, a body with which it can interact with its environment, grow and evolve. 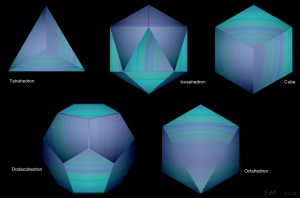 The Five Platonic solids are fundamentals in the creation of reality, they are everywhere, and in everything that can be known. They are not really five, but one with five distinct flavours. We have five senses of perception blended into one awareness. Each individual solid displays equal angles on its edges, each solid fits into all the others, and each one fits inside a sphere with every point just touching the surface of that sphere.

As matter is created spontaneously from the substance of the void, it filters from chaos into manifested order through the patterns that exist in Metatron’s Cube. 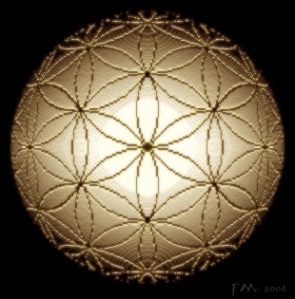 The cube emanates from the centres of geometrically positioned spheres. They represent the “Flower of Life” pattern. The Flower of Life is a hexagram, and is the organisational matrix of everything. Think of a snowflake. The Flower of Life can be imagined as separate atoms and the Cube as points of attraction between the hearts of those atoms. Also, if you scrutinize Metatron’s Cube carefully, you will notice that the individual Platonic Solids can be visualised as both small and large depending on how you are looking at them; they all collapse down into one. A metaphor for the collective human mind.

By combining the five solids, and drawing them inside a Flower of Life pattern, the ancients revealed Metatron’s Cube, which, just to reinforce its significance, is the first informational system encountered by spirit, enabling it to navigate in the structures of three-dimensional space. These shapes inform the relational parameters of everything, from crystals to DNA.

Johannes Kepler used the geometry of the Platonic solids to measure the orbits of the planets.

The five Platonic Solids are rather like vowels in Gods language. They make it possible for the “Word to become flesh” and for us to exist. Crystal geometry is at the very root of our being.

Although attributed to Plato, it seems likely that the solids were known in a far greater antiquity. Surely Atlantis, Lemuria, and other forgotten highly developed civilisations didn’t get by without this information. There is evidence that the Celts were aware of the solids, and that the druids had connections with Egypt and other Eastern countries.  Also, Pythagoras believed that the physical universe is ultimately dodecahedral, and recent discoveries made by mathematical physicist Roger Penrose and others suggest that it may be so.

Mystics in ancient Egypt, when meditating on the nature of the void would mentally build Metatron’s Cube from the fabric of the void using their inner vision. This difficult exercise which requires prolonged intense concentration, helped them to understand the science of creation through manifestation. 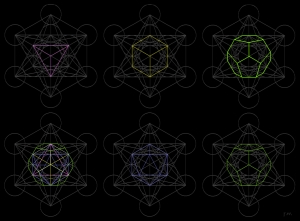 Only spirit can sense the invisible dimensions this way, by creating them. It is the same when we look at a painting or a photograph, a flat object which the mind automatically decodes into three-dimensions to fully appreciate. 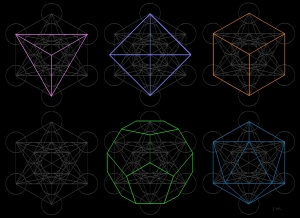 A good wheeze is to make photocopies of the diagram featured below, and spend a little time colouring in the platonic solids as you find them, this makes them much easier to see in three dimensions, and it’s fun. (A good way to keep small kids busy on rainy days).

All crystals are solidified Metatron’s Cubes, so is DNA. We have geometry, symmetry, and order.  Therefore – we are crystals at the centre of our being.

*Cymatics is a Greek word, and is therefore pronounced Kim-At-ics. It means “waves” and refers to the geometric effects of sound waves upon matter.

Needless it should be to say, but said it must be: Nothing written on this website should be considered before professional medical advice in the case of any medical condition whatsoever. And, only an idiot, or a complete curmudgeon would believe otherwise!

FURTHER LEGAL SUNDRIES:
Please feel free to use excerpts and links from this original copyright material on the provision that you have natural good manners and say where you got it:

3 thoughts on “A Pythagorean Universe” 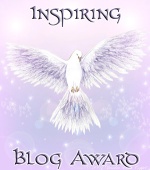